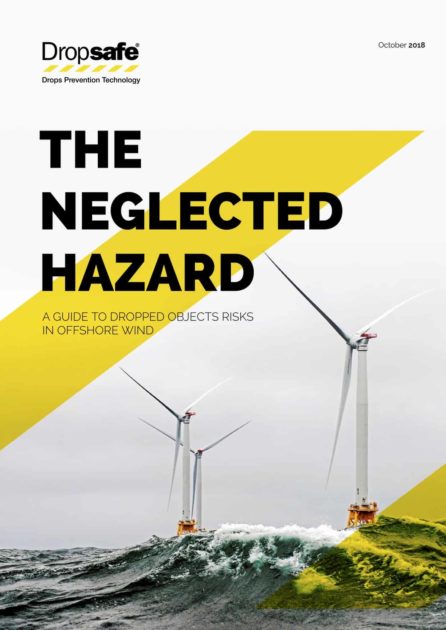 Dropped object incidents continue to threaten technician safety, financial performance and stakeholder reputation – but the sector lags behind on reporting and mitigation

Amsterdam, 23rd October 2018 – Dropsafe, a global provider of dropped objects prevention technology for the energy and resources markets, has reported on the risk posed by Dropped Objects to the health and safety track record of the renewable energy industry. Collating the latest data on Dropped Object incidents, Dropsafe’s white paper, The Neglected Hazard: A guide to Dropped Object risks in offshore wind shows that Dropped Objects are an ever-present, increasing threat to safe and cost-effective project development and operations in offshore wind.

Furthermore, despite recent efforts to improve reporting procedures and best practice approaches, the industry needs to take further steps to proactively mitigate this risk before a significant Dropped Object incident dents the reputation of a major player – or the incident rate increases to the point that costly regulatory action must be taken.

Dropped Objects in offshore wind include materials carried by personnel, lifted or carried from support vessels, or smaller items fitted to the wind turbine, like nuts and bolts, lights, ventilation louvres or hatches, falling from height. Incidents can occur either on the wind turbines themselves, or on vessels being used for turbine installation and maintenance. This definition does not include the heavy lifts performed during construction, main component change-out, or decommissioning.

Although formal recognition was made of the risks from Dropped Objects in the offshore wind industry in 2014, a centralised approach to incident reporting in offshore wind has yet to be established, with different organisations such as the global offshore wind health and safety organisation, G+, and the IMCA reporting separate figures.

At the same time, best practice mitigation guidance for offshore wind firms remains limited. Indeed, in the 2018 G+ Working at Heights guidelines, end operators are encouraged to refer to global dropped objects organisation, DROPS, for further guidance.  This DROPS guidance has yet to be officially published and ratified.

While the data isn’t, therefore, always clear cut, in its 2017 figures, the IMCA has reported a downward trend in lost time injuries (LTIs) from dropped objects – but this must also be factored against an overall decline in working hours across the industry.

Figures from the G+, conversely, show an increase in the total rate of recorded dropped object incidents that is 3.5 times that from the IMCA, and an overall uptick in incidents from 2015 – 2017.

“In offshore wind, a tough and unforgiving environment, reputation is key,” said Mike Rice, Commercial Director, Dropsafe. “And in order to maintain current growth and industry momentum, it is the responsibility of businesses throughout the supply chain to consistently demonstrate that an offshore wind farm is not just a clean, reliable source of power, but also remains a safe place to work, all the way through its lifecycle.”

“The industry is under pressure to keep a lid on costs, but this approach in pushing towards a lower levellized cost of energy cannot come at the expense of health and safety best practice.”

“Our experience from the offshore oil and gas markets shows that Dropped Objects present a fourfold threat to the safety of personnel, the integrity of equipment, financial performance, and ultimately the reputation of offshore wind firms and their high-profile stakeholders.”

“Yet, despite this ever-present threat, the offshore wind industry has yet to follow the lead of other marine industries, both in reporting incidents, and in adopting robust mitigation measures across turbine and vessel fleets. This ultimately puts the sector at risk of having uniform regulations and standards imposed upon it that jeopardize its ability to manage long-term costs in a sustainable manner.”

Download your copy of The Neglected Hazard: A guide to Dropped Object risks in offshore wind here.